Before our Exploring Literature group embarks on tackling Dante’s The Divine Comedy, I thought that I’d better do some background reading and refresh my memory about terza rimas.

TS Eliot noted that it is much easier to write a terza rima in Italian than in English.  Terza rima is Italian for `three rhyme‘, and is said to have been invented by Dante. It is generally iambic and has a rhyme scheme  aba,bcb,cdc,ded etc. The Italian language certainly lends itself to that rhyming scheme – much more so than English.

When Clive James translated The Divine Comedy, that was aptly described as a monumental achievement. Unlike some who have avoided rhyme in their translations, he has produced one long rhyming song. Amazing! No wonder it took decades to achieve.

I’ve borrowed a book from a friend which is giving a fascinating insight into Dante’s life . Patrick Boyde, in the preface to his book Dante Philomythes and Philosopher -Man in the Cosmos, notes how Dante was  a lover of myth as well as a lover of knowledge – a philomythes  and philospher. So, adding those attributes to poet, it’s little wonder his work has been revered for centuries.

As for writing a terza rima – I attempted to write one about twelve years ago when I set that as a task for my then writing group.  Given my interest in archaeology and the fact that we were trying to make a vegetable patch out of a new garden, my poem was based on the items being turned over by our digging. My abysmal effort is evidence of how difficult I found it (the writing not the digging).

This pipe is from a world of long ago.

A time when life was simpler but so hard

with little time for leisure, and we know

the tales told often by the local bards

Life then tested the labourer and his wife

they struggled on through times of strife.

We dig the soil, to find clay pipes again

with bottles and a twisted ancient plough.

In future years, will signs of us remain?

Will future gardeners look on our life now

and wonder at the way we lived, and how? 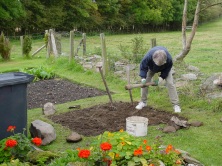 This is the first, and almost certainly the last, terza rima I have attempted…

But I am looking forward to when our group starts studying Dante in the autumn!