This is a year that everyone will have a number of reasons to remember. Not least Covid 19, the shambolic state of politics here and elsewhere and the dire state of the economy of so many countries. Then we have the ongoing tragedies of refugees, the rise of anti-semitism, homelessness, climate change – all of which are major problems that seem a long way from being adequately addressed. It’s no wonder that more and more people are finding the natural world can give some moments of joy.

During the long weeks of drought and lockdown, the daytime hours for me have been divided mostly between gardening and taking local walks. The garden has certainly needed the extra attention it’s had this year and it is now becoming more how we want it to be.

However, there are a number of shrubs and trees that were well established when we moved here nearly five years ago. One of these is a very healthy honeysuckle which is right next to the greenhouse. This is significant because apparently honeysuckle is a big attraction for certain insects and especially Elephant Hawk-moths. We have been finding them on our morning visits to check the plants. Presumably, when they land on the honeysuckle, they are attracted by the warmth of the greenhouse.

another, caught in a web

daily but one, was destined to live.

Largest of moths – caught by a tiny spider,

You free it from sticky tether,

it remains on your hand

now on your shoulder, reluctant to move.

Trust from a moth,

a gift you savour. 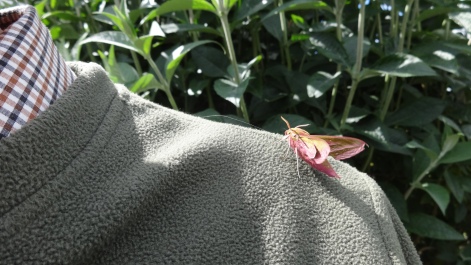